LG impressed us last year with its excellent set of mid-range TVs and the new LB730V continues the same legacy. Its eye-catching curved stand immediately sets it apart from other TVs and it’s available in a range of sizes from 42in right up to 65in, costing between £579 and £1,799. This is a little more expensive than Samsung’s excellent H6400 series, but we think the extra expense is definitely worth it if you’re looking for the best picture quality.

For this review we tested the 47in model in the LB730V range, but it's also available in 42in (42LB730V), 55in (55LB730V), 60in (60LB730V) and 65in (65LB730V) screen sizes. All models have identical specifications except for their dimensions and power usage. We're confident that image quality will be practically identical across the range.

Straight out of the box, our colour calibrator showed the TV's IPS panel was already showing an excellent 95.6 per cent of the sRGB colour gamut on its default Standard picture setting, and we only had to shift the colour temperature all the way to its maximum warm setting to get a near perfect 99 per cent. This is excellent for a mid-range set and much higher than other similarly-priced TVs we’ve tested, so you get an instantly better picture with very little effort. Brightness was also higher than average, measuring 165.31cd/m2 and the TV’s low black level of 0.16cd/m2 meant darker areas of the picture were deep and inky.

The LB730V’s other picture modes were equally impressive. Game also covered 95 per cent of the sRGB colour gamut, while Cinema and the two ISF Expert modes were all above 98.5 per cent without us making any adjustments to the picture. There’s also a Sports, Vivid and Eco mode, but we found these were far too sharp and oversaturated to be comfortable to watch without making a few adjustments.

Cinema mode also gives you an extra Expert Control menu, which gives you access to full two and twenty point white balance options and a colour management system. This allows you to really fine tune the TV’s colour accuracy, but we were a bit disappointed this wasn’t available on other picture modes. It’s not really too much of a problem since the TV has such good picture quality in the first place, but it would be difficult to improve the TV’s image quality without this if our colour calibrator scores were much worse.

Luckily, our Blu-ray of Star Trek looked fantastic.  We lost a bit of the film’s unique film grain effect when we switched to Cinema mode, but we were able to improve this by disabling the noise reduction settings. Contrast was good, measuring 897:1 with our colour calibrator, and we were able to see a high level of detail in darker night scenes regardless of whether we had the lights turned on or off.

We were also impressed with the LB730V’s image processing. Camera pans were smooth and we almost didn’t feel the need to enable LG’s TruMotion frame interpolation feature. This adds extra artificial frames into the picture to help it look smoother. We found that Clear was the most balanced option, as Smooth looked a little too unnatural and introduced hints of tearing and Clear Plus lowered the backlight slightly. However, we were particularly pleased to see a customisable User option available, which gives you control over the judder and blur. This kind of feature is normally only available on top-end models, so to see one at this price is superb.

^ In addition to a more traditional remote control, the LB730V comes with LG's new Magic Remote as well

The LB730V comes with two pairs of passive 3D glasses and its 3D menu settings are much more advanced than other mid-range sets. You can switch between Auto and Manual modes, the latter of which lets you adjust both the 3D depth and 3D viewpoint to your liking. It’s unusual to see this level of personalisation on a mid-range set, and you can also change the 3D colour correction and switch the 3D image from left to right and vice versa.

Standard definition content looked surprisingly good, too. Text looked a little fuzzy, but on the whole the LB730V upscaled it very well. Super resolution helped add a bit of extra detail to the picture, but it didn’t make a huge difference, and the noise reduction and MPEG noise reduction settings also had very little effect on the overall picture. 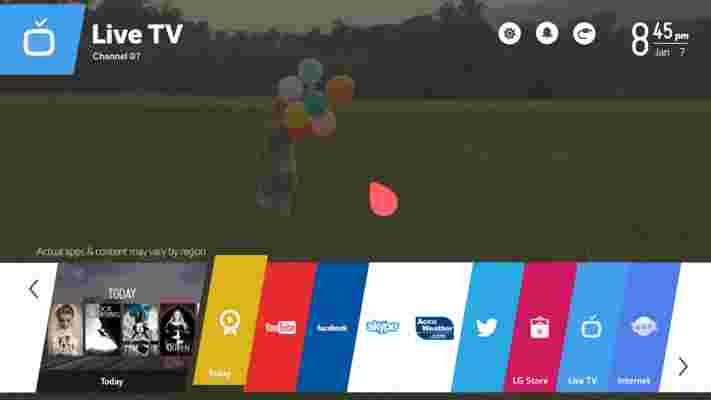 The jewel in the LB730V’s crown is undoubtedly LG’s beautifully slick webOS Smart TV interface. With its series of long, colourful cards that appear along the button of the main home screen, it’s by far one of the best designed and easy to use Smart TV systems we’ve seen, and we actually prefer it to Samsung’s. It really comes alive with LG’s new magic remote, too, which has a built-in motion sensor so you can simply run through the menu options by pointing it at the screen and pressing the central scroll wheel to select your option. It works in a very similar way to a Nintendo Wii Remote, but you can always opt for the more traditional remote if you prefer.

All the important apps are present, including Netflix, Amazon Instant Video, Now TV, BlinkBox, BBC iPlayer and Demand 5, although it would have been nice to see ITV Player and 4OD there as well to complete the set. There’s also Facebook, Twitter, Deezer, Picasa and Plex for LG Home Theatre, although the latter will cost you £3 from LG's app store.

Round the back you’ll find plenty of inputs, including three HDMI inputs (one of which is ARC compatible for a sound bar or speaker system and one of which has MHL support for MHL-compatible smartphones and tablets), SCART, component and composite inputs, a CI slot, an optical audio S/PDIF output, a 3.5mm headphone jack and three USB2 ports. There’s also an Ethernet port, but the TV’s integrated Wi-Fi makes it much easier to get online. The LB730V also supports DLNA, Miracast, and Wi-Fi Direct. If you're using a USB flash drive, the LB730V supports all the main file formats, including MP3, OGG, M4A, WAV, WMA audio files and MP4, AVI, DIVX, MKV, MOV and WMV video files.

LG's LB730V range is a fantastic set of TVs. It not only has one of the best screens and smart TV interfaces we've seen, but its flexible range of picture options give you much more control over your TV than any other set in this price range. It's a little more expensive than the Samsung H6400 series, but the LB730V is a superior breed of TV. It wins a Best Buy award. 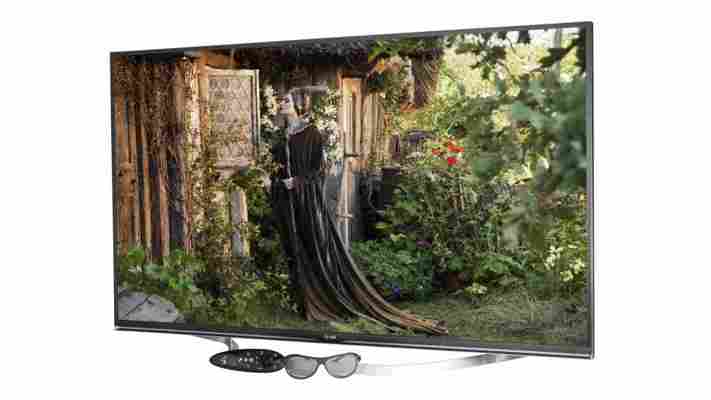