Philips 55POS9002 review: Yet another OLED marvel from Philips 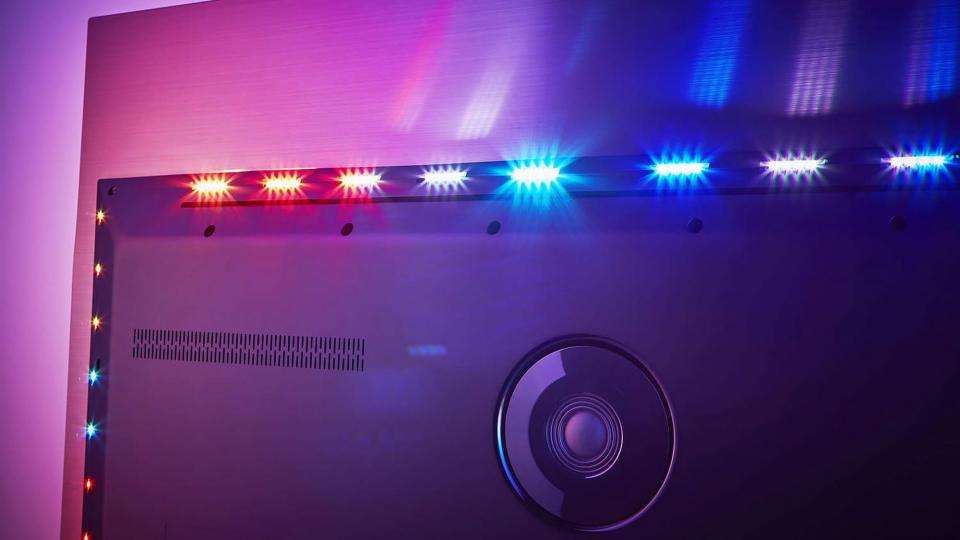 Philips 55POS9002 review: Yet another OLED marvel from Philips

Following up on the critically-acclaimed Philips 901F which we reviewed earlier in the year, TP Vision – the company responsible for the development and marketing of Philips-branded televisions in the UK and Europe – has unleashed its second OLED TV in the form of the 55POS9002.

This 55in 4K HDR screen is simply packed with stand-out features. As ever, Philips's excellent Ambilight integrated bias lighting technology makes the grade (which we’ll explain shortly); and there’s also Ultra HD Premium certification; the TV runs on the Android Smart TV platform; and the new P5 processing chip promises to improve the picture quality of even less-than-pristine sources.

The Philips POS9002 is a devilishly handsome TV. The panel is supported by a central U-shaped stand that carries a tasteful brushed metallic silver finish, and as OLED displays don’t need a backlight, both the panel and the bezel are impressively slim. An illuminated Philips logo hangs from the bottom edge of the screen, but fear not – the light can be dimmed or even switched off from the user menu.

Look to the rear, and you’ll notice an array of LEDs stretching around the TV’s upper edges – it’s these which create the Ambilight fireworks. These strips of multi-coloured LEDs can be set to react to the actual onscreen colours, gently illuminating the wall behind the TV in the same hues as the onscreen action, or you can just select a single netural colour if you find that too distracting. Ambilight isn’t just a gimmick, though: the technique is called bias lighting, and it helps to increase the perceived contrast and colour vibrancy of onscreen images.

What’s more, the 55POS9002 also supports Philips’ Hue connected lights. Dot a few Philips Hue standalone lights or lightbulbs around the room, and the TV can dynamically change the colour and intensity of the lights in your room to match what’s playing onscreen.

Like many OLED TVs, the bottom rear of the Philips 9002 bulges out to accommodate the internal components, power supply and connection ports. Four HDMI inputs are provided, although only HDMI 1 and 2 support the HDMI 2.0b standard for HDR10 and HLG (Hybrid-Log Gamma) formats. All the sockets face either sideways or downwards, a blessing for wall-mounting owners. Sound quality isn't as rich and detailed as the integrated soundbar found on the Philips 901F.

As the Philips runs the Android TV operating system, it’s no surprise to find that the supplied remote is dual-sided, featuring traditional buttons on one side, and a QWERTY keyboard on the other to speed up text input. The operating system has the familiar, tile-based home page interface, but we noted that it feels slicker than Sony's implementation of Android TV on its sets. Netflix, BBC iPlayer and Youtube video apps are present, but there’s only one minor disappointment – Youtube doesn't display in HDR. 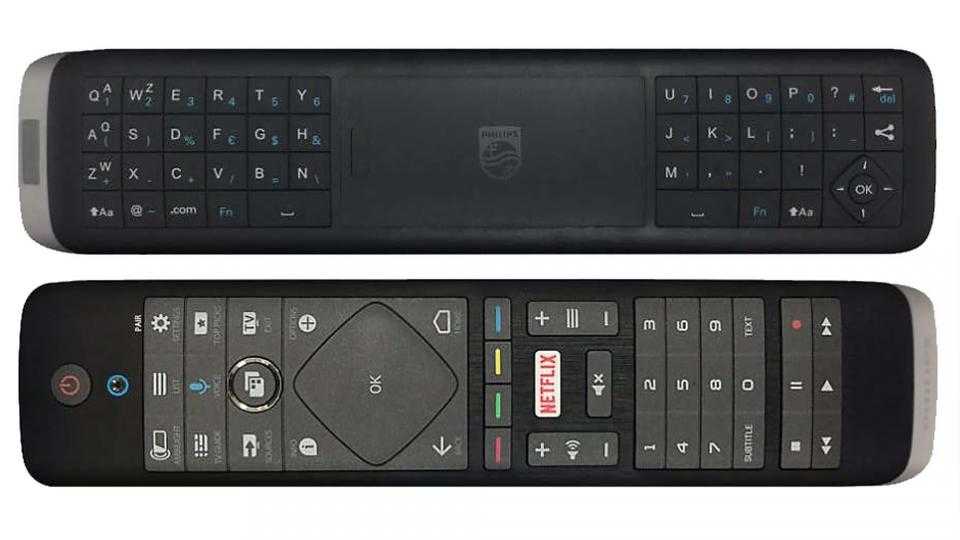 The Philips 55POS9002 uses a simply stellar OLED panel. The usual traits of the technology get it off to a great start: as OLED tech allows every pixel to be switched on and off independently of each other, and each is its own discrete light source, the 55POS9002 is able to achieve the perfect blacks that leaves even the best full-array local dimming LED LCDs looking slightly grey by comparison.

This blanket of inky blacks injects breathtaking amount of pop and depth to every image displayed on screen, and also serves as the ideal canvas for colours to flourish without being diluted by any errant backlighting shining through.

Viewing angles are also top-notch, suffering from virtually no drop-off in colours and contrast when watched from the sides. In our experience, 55in OLEDs generally exhibit better near-black and colour uniformity than 65-inch versions, and our Philips 9002 review sample was no exception to the rule – it gave us no cause for concern in this department.

Philips' new P5 picture processing engine works well to present a watchable image from lower-quality feeds, but for high-quality sources, we like to switch most processing off to prevent the picture from looking unnatural. Motion handling is top-notch, and there's enough customisable controls for users to achieve their preferred smoothness and clarity.

In terms of HDR, peak brightness reached 740cd/m2 – much lower than LED sets, but respectable by OLED standards – and the Philips’s vast palette of colours allowed it to cover an impressive 98% of the DCI-P3 colour gamut. Both of these results are enough to prove that the Philips POS9002 genuinely deserves its Ultra HD Premium stripes.

Again, thanks to OLED's pixel-level light control, HDR videos looked mightily impressive. There are no haloing or blooming artefacts to spoil the picture, although Philips’ processing of HDR material does mean that very bright detail may disappear – rather than dimming the overall image to retain all the highlight detail, Philips’ tone-mapping errs towards clipping the very brightest tones. There’s only one quibble on the HDR front, and that’s that Philips’ TVs support neither Dolby Vision nor HDR10+ dynamic metadata technology at this time of writing.

Still, firing up your nearest games console won’t leave you disappointed. TP Vision has improved the gaming responsiveness on the Philips 55POS9002 compared with its predecessor, the 55POS901F. Input lag measured 39ms in both 1080p SDR and 4K HDR [Game] modes, which while not the best in its class, should be quick enough for all but the most demanding of gamers.

The Philips 55POS9002 is a stunning TV. For this level of performance, the asking price is eminently reasonable, and with great motion handling, video processing and Ambilight/ Philips Hue integration, it definitely deserves a place on your wish list. 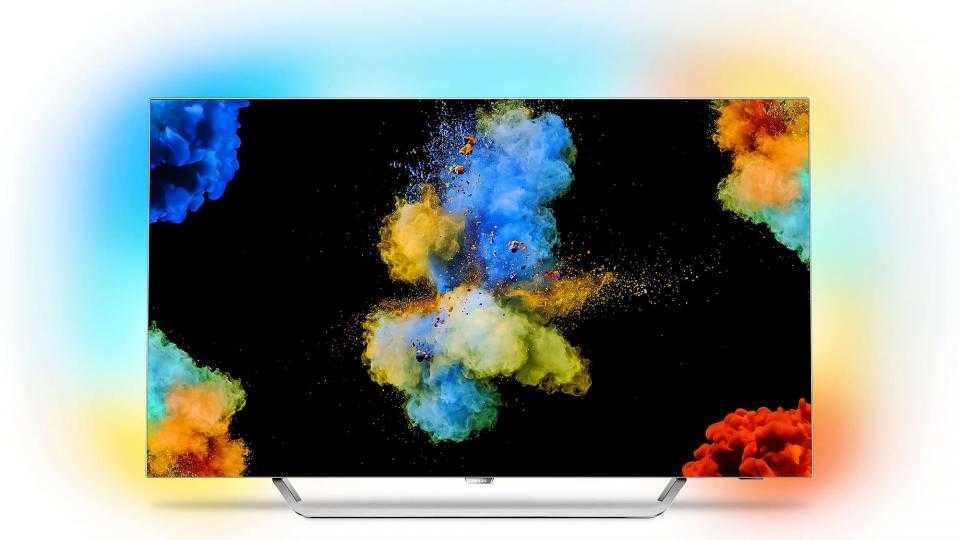