Microsoft Films & TV is suffering from an identity crisis. Depending on what device you use to access it, it has a different name. On Windows 8.1 and Windows Phone 8.1 it's called Videos (but the storefront is labelled Xbox Video), on Windows 10 and Windows Phone 10 it's called Films & TV, while on Xbox consoles and the web it's called Xbox Video. Whatever name it chooses to go by, the content and pricing is the same and the interface design is largely identical, too.

Microsoft claims a content library of more than 150,000 videos in the UK. The library includes the latest big-name films and TV programmes, and there are also items available for pre-order. Some titles also come with bonus features; the pre-order for this year's Ted 2 film also comes with a behind-the-scenes featurette, for example.

Pricing on new films is a little higher than most, with new titles costing £4.95 to rent in HD instead of most services' £4.49. Buying an HD film outright typically costs the standard £13.99. TV series follow a similar trend: Game of Thrones Season 5, which would normally cost £22.99 to buy in HD, is priced at £23.99 on Microsoft's services. While some items are more expensive, you'll occasionally find some small savings; for example, the second half of Season 7 of Mad Men is £16.49 in HD, while most other companies charge £16.99 or £17.99.

Microsoft Film & TV content is available in 1080p, although this is only on certain devices, as explained below. Most content is available in 720p, and some also comes with 5.1 surround sound, although the store pages do not differentiate between stereo sound and 5.1, which will be an annoyance for those who want to get the most from their high-end cinema system. English subtitles are available on a fair amount of content, but not all. For example, we found there were no subtitles available for the 17 seasons of Top Gear available on the service. You'll find whether a title has subtitles by checking for 'CC' (closed captioning) at the bottom of a video's store page.

There are some slightly strange limitations to Microsoft's service. The limitations that apply to rentals are as follows: A rental is for 14 days, not the typical 30 days you get on other services. Even worse, once you press play you only have 24 hours to finish watching, so have little choice but to watch it in one sitting. The worst limitation, however, is that you're only allowed to watch a rented video on the device you originally rented it on. If you rented something on your Xbox 360 one evening, but didn't have time to finish that night but had time on your commute to carry on watching the next morning, you wouldn't be able to. You'd have to watch at home in the morning and be late for work, or take your Xbox to work and finish it off at lunch time, which is highly unlikely. It's a bizarre choice that makes Microsoft's service significantly less attractive.

Microsoft's top-end 1080p content (captured on an Xbox One) looks reasonably good when compared to Blu-ray. Contrast and colours look natural, and the only evidence you have of this being a slightly compressed version of a movie are less well-defined edges on things like hair and other outlines. Very fine details, such as the jacket on the gentleman standing behind Benedict Cumberbatch on the shot below are also smoothed over, but if you're not analysing your movies frame by frame, you won't feel too hard done by.

Click on either image below for a larger view. 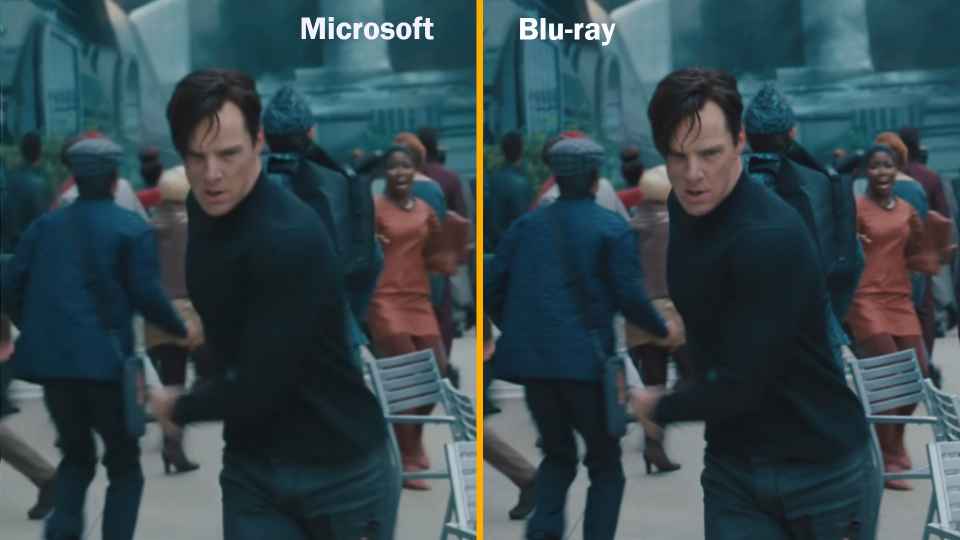 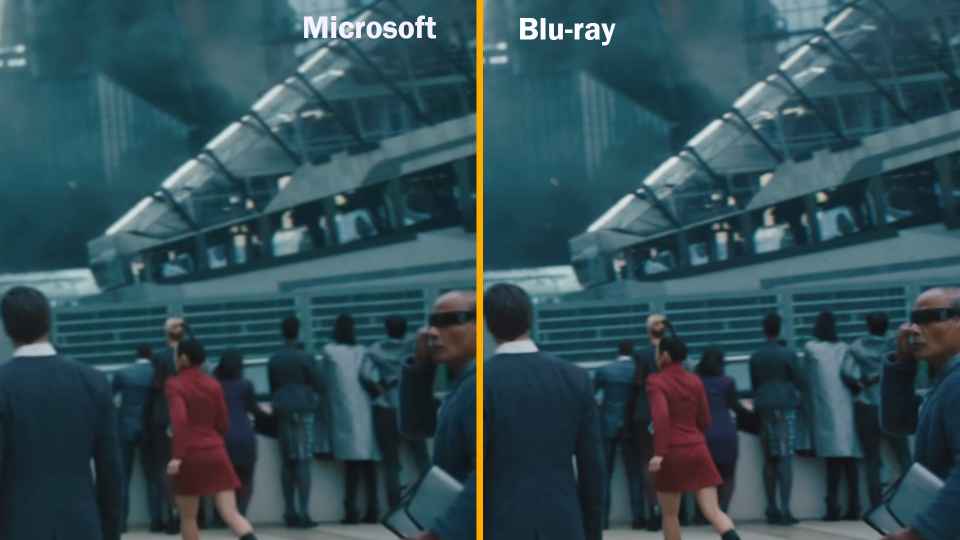 The service is unsurprisingly Microsoft-centric, although you can watch on the web in 720p on Windows and Mac (using Silverlight, which doesn't work in Chrome). There's no Android app and no iOS app which, while understandable, is a frustration for buyers who just happen to own a non-Windows smartphone or tablet.

As the Xbox Video name implies, you can also watch on your Xbox 360 and Xbox One consoles. An Xbox is the only place you can watch your rented and purchased content at 1080p resolution, as long as your devices are connected via HDMI. If you have an Xbox 360 that's using the Xbox 360 Component HD AV Cable, you can view a maximum resolution of 720p or 1080i, neither of which are as sharp as proper 1080p. There's no support for smart TVs or smart TV boxes such as the Roku.

Despite offering apps for Windows 8.1 and 10, Microsoft Films & TV is still not the best place to buy and rent TV and films on your PC, due to a 720p cap on resolution; that honour goes to Google Play or iTunes . It is, however, by far the best service to use with your Xbox console, thanks to Full HD resolution and surround sound available for high-end home cinema setups. 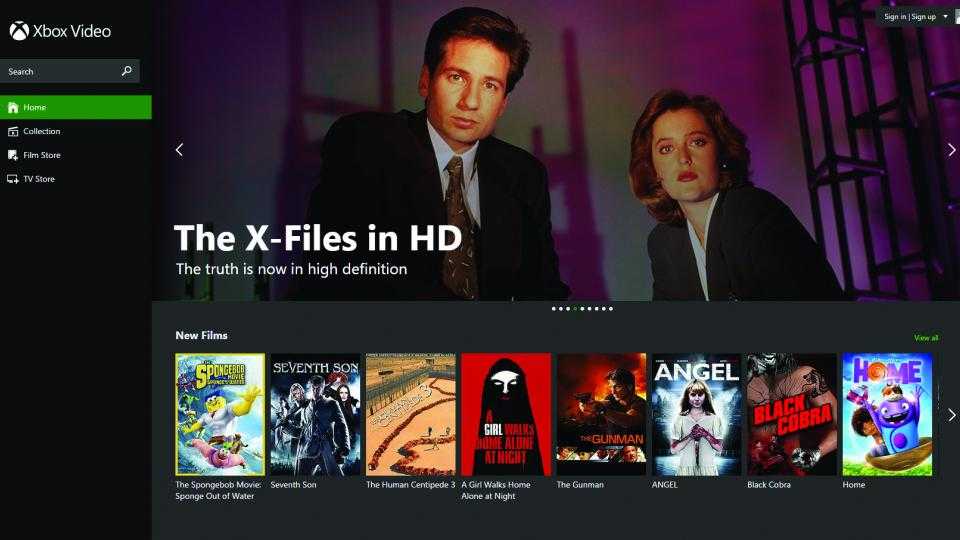