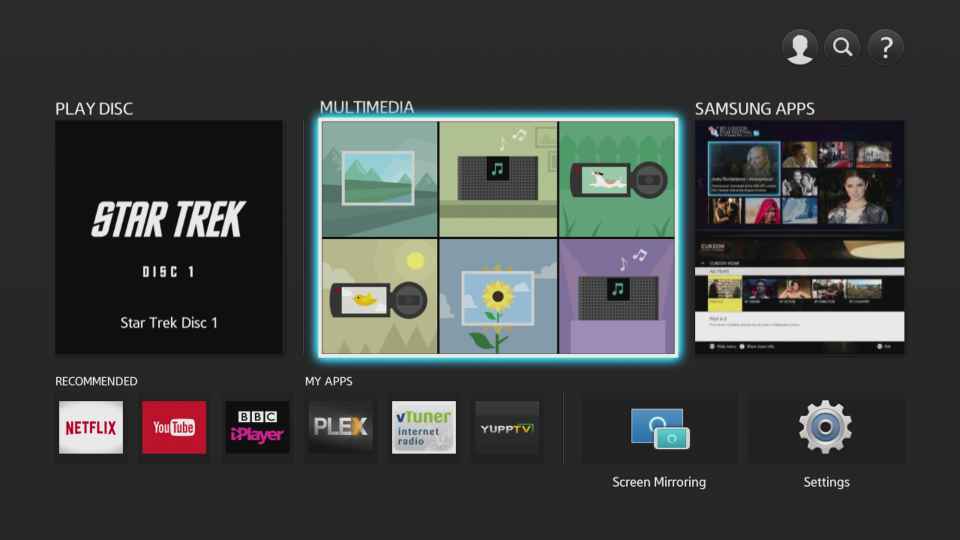 More and more of the content we watch might be provided digitally, but that’s not to say many of us don’t still buy our films and TV shows on discs. Samsung’s latest Blu-ray player is about as feature-packed as they come, so while you’ll need to find room under your TV for it, the BD-7500 easily justifies the extra space it takes up over an Amazon Fire TV or Apple TV streaming media box.

With a simple menu interface broken into three main sections for Blu-ray playback, multimedia and Samsung Apps, the BD-7500 is undeniably comprehensive. The Multimedia section lets you play content from network storage using DLNA, or directly from a USB flash drive plugged into the USB port on the front of the player. It detected the folder structure of a network attached NAS perfectly, but Plex users will be pleased to hear it is supported as well; this makes it easier to play content off any network media server running the Plex software, including a PC.

The Samsung Apps section contains a number of pre-installed apps, but also lets you download the catalogue to get more. Once you’re online, either via Wi-Fi or Ethernet, you’ll be able to access on-demand and catch-up content from every terrestrial UK television channel. Streaming video mainstays such as Netflix, Amazon Instant Video and YouTube naturally make an appearance too, while music streaming is included thanks to Spotify and Deezer. 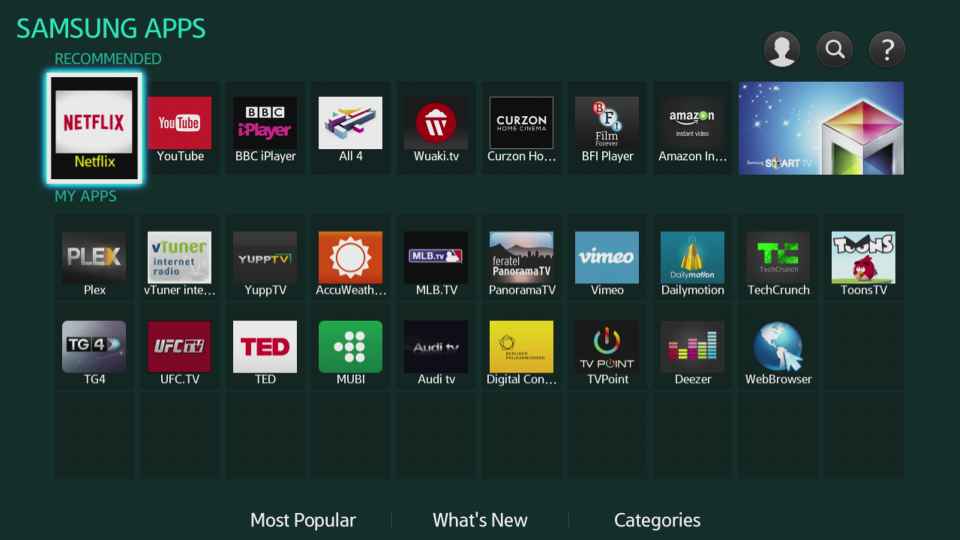 Fortunately, most of these third party apps use their own software keyboards; the default Samsung onscreen keyboard is blighted by lag, feeling very slow to use. Thankfully I only had to briefly use it for entering the network password. The rest of the Smart TV interface felt responsive, even if apps took a few seconds to load up, but essentially speed was on par with other smart TV and Blu-ray player interfaces. It only took a few seconds before playback begins when inserting a Blu-ray disc.

You can control the BD-7500 using the touch-sensitive LED controls on the top of the player. They have subtle backlit LEDs indicating power, eject, play/pause and stop operation. However, they dim during playback, making them difficult to find in the dark. Most people will rely on the included remote control, which has all the settings you would expect in a relatively compact unit. 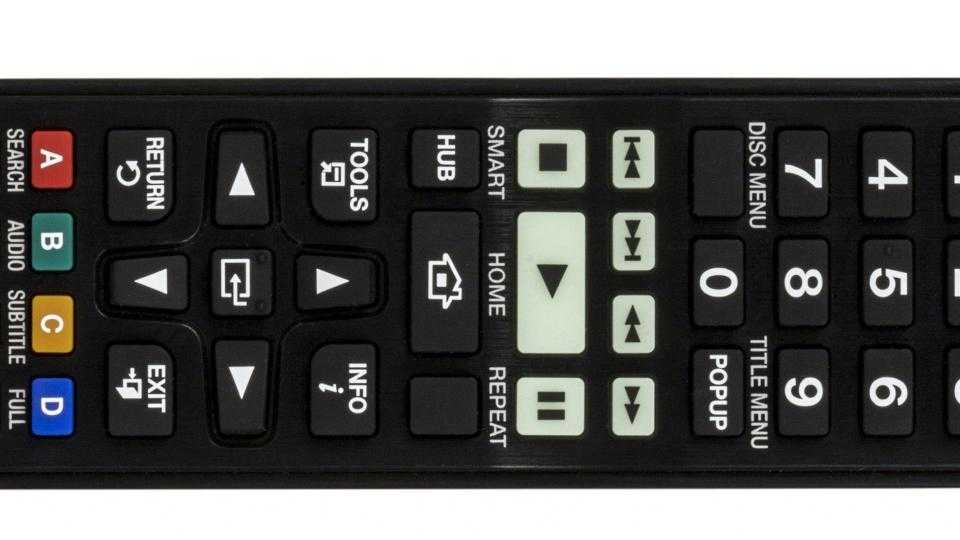 The LCD display on the front of the player indicates whether it is playing from a disc or streaming content from one of the apps. It’s equally subtle, so won’t create much of a distraction while you’re watching movies at night. The slim, stylish player is no deeper than a Blu-ray disc case, with a black and gunmetal exterior finish that should match most TVs.

There’s a pair of HDMI outputs on the back of the player, which is ideal for projector owners; you can connect to your TV and projector simultaneously, saving the need to rewire everything when you want to watch on the big screen. You could also use the second HDMI to relay audio to an AV amplifier that doesn’t support 3D video. You can also use analogue outputs for up to 7.1 surround sound, or fall back to optical TOSlink if your amplifier doesn’t support HDMI. If you own any Samsung M-Series wireless speakers or sound bars, you can connect the BD-7500 to play CDs through every speaker in a system. 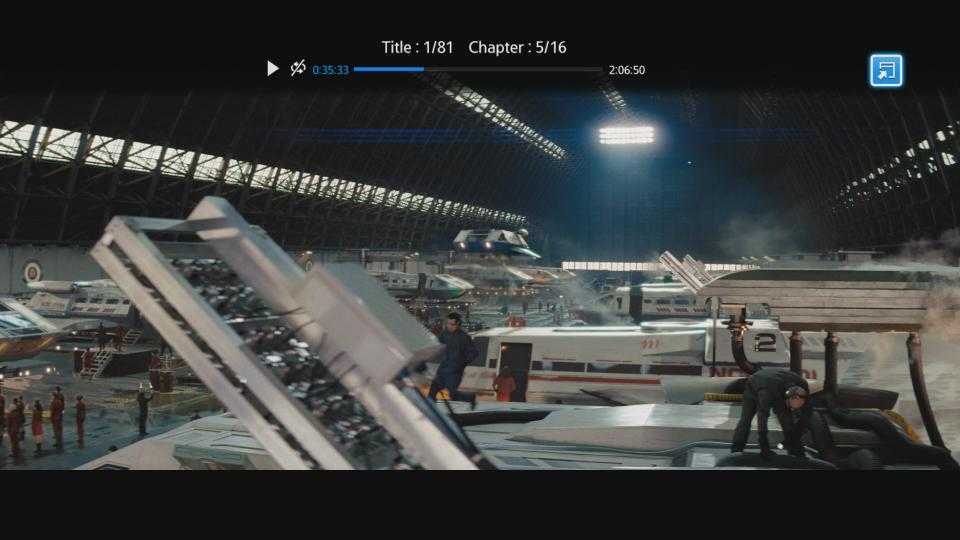 The other feather in the BD-J7500’s cap is its ability to upscale to 4K resolution. While a handy feature, especially for those who’ve been quick to adopt a 4K-capable television, its usefulness might well have a short shelf life as native 4K (UHD) Blu-ray discs could be with us as soon as Christmas, removing the need to make do with less than ideal upscaling. Unless you have a particularly cheap 4K TV, it will most likely do just as good a job at upscaling, too.

Image quality was as good as expected from a higher-end Samsung player, with plenty of crisp detail from our Full HD test Blu-rays. Contrast could have been a bit more pronounced out of the box, but the user controls allow you to tweak the colours and contrast more to your taste. 4K upscaling looked relatively subtle when connected to a UHD TV, so don’t expect the BD-7500 to work miracles with non-native 4K content, but anyone with a library of DVDs will be pleased to hear Full HD upscaling looked very good. 3D Blu-ray discs also looked excellent, with plenty of pop to the image.

The BD-J7500 proves itself as an all-in-one entertainment hub, with streaming service support that rivals dedicated media players from the likes of Roku and Amazon. It’s more than capable Blu-ray player as well. It remains to be seen how useful its 4K upscaling will be, considering UHD Blu-ray discs aren’t now very far away, but if you aren’t bothered by UHD content, it’s a great overall package with plenty of added value.